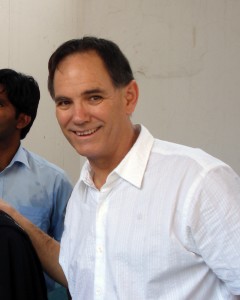 Howard Clarence Ferris was born in Portland, Oregon to Marion “Zeke” and Eileen (Taylor) Ferris. He graduated from Oregon Institute of Technology where he majored in engineering. After graduating in 1975, he married Leslie Dodge and was employed for almost 40 years by PacifiCorp as a civil engineer. In 2005, Howard and Leslie founded Eternal Life International because they had a great desire to preach the gospel to people who have never heard of Jesus Christ. Howard was an active member of Victory Faith Church in Oregon City, OR.

What Your Donation Can Do?

On our first trip to Pakistan we saw over ten thousand receive Christ. Afterwards when counting up our crusade expenses, we figured that it cost roughly $1 per soul reached with the Gospel. Can you imagine what a great investment opportunity this is…