Howard and Leslie Ferris were always challenged by the words of Jesus in John 14:12 when Jesus said that those who believe on him would do the same works that he did. While being Christians for many years, they just did not see a demonstration of these miracles in their lives nor in the charismatic churches they attended. Although there were occasional moves of the Spirit and healings, there were not the miracles of biblical proportion demonstrated by Jesus in the Gospels.

It was during a short term mission trip and evangelistic training school in Honduras, Howard Ferris learned that the power to produce miracles is in the message of the Gospel (Romans 1:16). By employing the simple gospel message, he saw immediate results when the first two people who heard the message that day received miracles. One man who was deaf received his hearing and another paralyzed from a stroke regained full use of his arms and legs. How wonderful to discover that the power to produce salvations and miracles is in the “message” not the messenger. Knowing this gives the believer confidence that if they share the gospel, God will back them up and confirm the word with miracles, signs and wonders (Mark 16:20) Since that time, they have preached the simple gospel message in many nations and with Christ confirming the word with nearly every kind of miracle in the New Testament, including raising the dead. They have now dedicated their time to preaching the gospel to those who have never heard and training others to preach the gospel with miracles, signs, and wonders.

God is now leading them to hold larger and more frequent meetings to reap the ever perishing harvest. They have formed Eternal Life International to facilitate the spreading of the Gospel in those areas of the world not previously reached. Though Howard is an Engineer for the Electric Utility, he uses his vacation time to hold evangelistic meetings in various countries. They have held evangelistic outreaches and ministered in Pakistan, India, Honduras, Costa Rica, Mindanao, Singapore and the Philippines. Since 2005, they have reached over 100,000 first time believers. Many of these first time believers are Muslims.

Leslie and Howard do not receive any salaries from the donations. All of the money that is donated goes strictly to reaching those unreached with the gospel, and training the Nationals in each country to do the same. 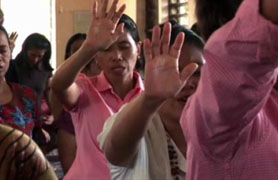 What Your Donation Can Do?

On our first trip to Pakistan we saw over ten thousand receive Christ. Afterwards when counting up our crusade expenses, we figured that it cost roughly $1 per soul reached with the Gospel. Can you imagine what a great investment opportunity this is…